I haven’t updated this blog in 4 months and I’m really sorry for that. A lot happened in my life and I’m about to graduate in 3 months, so I’m more than busy. To be honest, I haven’t even got the chance to read or watch any tv series, consequently I don’t have much to post about.

But there is one thing that I discovered two months ago and this little thing changed my life. 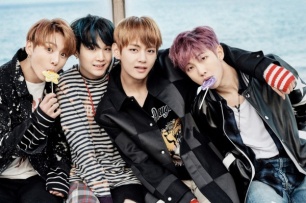 Let me introduce you to BTS. I’m sure many of you already know them, but if you don’t then you should definitely check them out.

Before the 19th of January, I had never heard of K-POP or BTS. I mean, I obviously knew that they existed, but I just wasn’t interested in them or this kind of music. Then one of my favourite youtubers uploaded a video of him reacting to BTS. And I’m not gonna lie – this video probably changed my life forever. I’ve always been a huge fangirl and all of my friends know how fast I can get attached to certain things.

And BTS is definitely one of those things.

The first video that Matthew reacted to in his video, was their mv for Not Today and let’s say I got hooked in a matter of seconds. Their dancing is unbelievable. I loved their singing even though I didn’t understand a word they were saying. And they were perfectly, good-looking. So good-looking, it should be a crime.

At first, it was really hard for me to tell them apart from each other and so I googled them for hours just to find out that the boy that I had fallen in love with at first sight was – drum roll – Jungkook. It just needed his solo part in Not Today for me to fall in love with his smile.

The next step for me was to watch every music video and dance practice that was ever released by them until I could tell them apart (with a little help of google of course). You should’ve seen my YouTube history, it only consisted of BTS – I mean it still does, to be honest.

When I ran out of music videos, I started to watch their vlog like videos with subtitles and I only started to notice how many of them existed, when I was already too deep entangled.

So the next few days, I started to build up profiles behind their faces and names – and I actually got to know them and their unique personalities. Which obviously made me love them even more.

I don’t think that I need to mention that Jungkook stayed my bias, but I learned over time that there is such a thing called bias wrecker. In my case, they are Jimin, V and Suga. I know that I will stay “loyal” to Jungkook, but I can’t help that my heart skips a beat when I see them.

My fifth step was to listen to all of their songs with English translations, so I could understand what their songs are about. It is really important for me that song lyrics are deep and that they actually have a meaning, which was – no surprise – the fact with BTS lyrics as well. After that I wasn’t sure how seven people like that could even exist, it’s just not possible.

Now, two months and a whole lot of research later, I am proud to call myself part of the Army and in some ways, I couldn’t even imagine a life without BTS anymore (I’m literally listening to their music 24/7). Which is a really crazy thing to say, but I don’t really care, because I know that there are many people out there who feel the same.